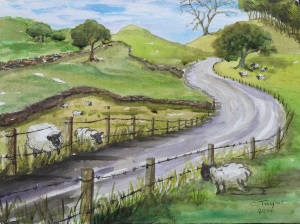 Way back in the year, our family friend Ronnie, commissioned me to do a little box canvas pen and ink painting of sheep to match the other one, of cows, which he had bought from me previously. I had said I would go and take photographs and then decide on which would make the best composition for the painting. As he wasn’t in any rush, I got a little side tracked, but did let him know a few times that I hadn’t forgotten!….Time crept on, more speedily than I would have liked and before I knew it it was September…halfway through the month was Ronnie’s birthday!!!! I decided I would make up for the time he had been waiting by giving it to him as a surprise for his birthday, that was when I had done it of course ;-/ Still I hadn’t been able to go and get any photographs…so, it would have to be an imaginary scene… I think all turned out well in the end, Ronnie was thrilled with his little 9 inch x 12 inch box canvas surprise painting and I got to splash around with some inks again 🙂

I wonder what sheep gossip about over their garden fences??? In an imaginary scene it could be almost anything – but, probably about the cost of wool these days!!! ;-/