For the past few days I have immersed myself back into artistic mode, key ingredients were;…One blue Pencil Crayon, One 20 x 16 inches sheet of Textured Watercolour Paper, pencil sharpener and a good rummage around my mind LOL Enjoy !!

The final result is the first in a new series I have planned, of new and exciting Cubism Style Abstract Doodle Art 😉 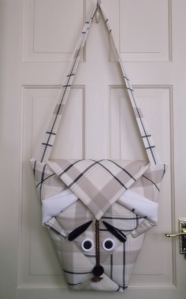 Something I have been meaning to do for a while…..Go Large!!….
No, not me ;-/ !
…with one of my little pattern creations!
Normally I consider the little multi-pocket pouches to be quite cute…..but this, well, it really blew my socks off when I’d finished it…
I woke up in the morning and the first thing on my mind was to find a piece of cream plaid fabric…strange what comes into your mind as you wake..maybe it’s my age?!? Anyway I knew exactly where it would be, NOW was to be ITS moment…even though I had never been able to decide what to use it for before..??
No sooner had I found it…. the kettle was on for second brew of the day, the rotary cutter was out, the iron was hissing steam and raring to go ;-D
Lots of stitching, folding and pinning, many more cups of tea and some time later…..It was a mega success!…I swear, even the fabric fairies must have been residing, as all the lines came together in just the right places 😀
I can’t tell you how mega happy it made me!!! So much so, I hung it on the door, just so I could keep looking at it !

Well, I just had to go and fiddle some more with one of my designs…What A Result!! Of course I didn’t stop there……..There’s a MINI-ME Too!!!!! 😉 A Unique Little and Large duo set, both with eight pockets and more lovely buttons. 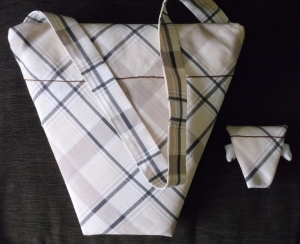 …And… a quick twirl…..YEP! Looking good at the back too!!! 😀
Some minor details; Mixed fabrics were used; Some lightweight cotton plaid canvas, a textured cream fabric for the interior and synthetic wadding to form a padded effect, one shoulder strap, for either cross bodied or shoulder wear, Little hand twisted cord tassel fasteners, Oh, and some lovely buttons too, all brought together to form lots of happiness !

Variation on a theme of late….Place-mats and coasters this time!

Sometimes, in fact quite often, I question my sanity over my desire to make more than one of something, especially as each one has so much work involved from designing it to the finished creation…BUT…to eventually end up making 12 !?! six place-mats & six coasters (each and every one slightly different too) then hand quilt them all…and, as if that wasn’t enough I added tiny hand stitched flower borders to them all as well..not to mention hand stitching the binding down…I might have to think about upping my hourly work rate from a penny an hour…..;-/

At first, there was…a set of two……

….obviously I still didn’t think that was enough….So, off I went again….. 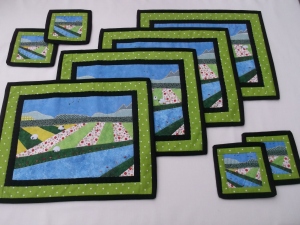 In case you had any doubts about the 12…… 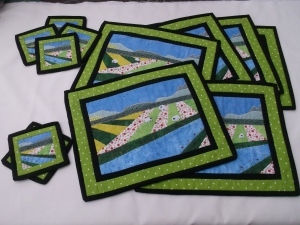 Perhaps, I’ll just sit and rock quietly in a corner for a while….;-)

In well under two weeks I have a result! From the humble beginnings of four cotton fabrics which I selected – to a finished little beauty! Lovingly hand crafted and hand quilted with ever so many stitches it could never, ever, EVER fall apart 🙂

My newest creation! Flying Geese and appliquéd hearts lap quilt number 2 actually finished yesterday, but my camera broke down – and here’s me thinking it’s the quilt design that is jinxed !!!  Maybe it’s just me…..!

My four chosen cotton print fabrics….after lots of hunting through mountains of materials at the fabric shop I eventually chose these four to go together. Tasteful, Simple, Rich, Stylish and Elegant! As soon as I had them in my arms all together, I could already see how the new quilt would look in my mind’s eye! The only thing delaying me from starting, was some good old fashioned hand washing of the fabrics to rid them of any excess dyes! No sooner dry and ironed…..let chopping, piecing and quilting begin 😉

I always think it is a good idea to make another ‘Goosey” quilt until I reach 5/31 geese border strips…then I sigh my way through the next 26….knowing, it WILL be worth all the effort – at the same time trying not to think of all the hand quilting to come ;-/ !!!!

A little hand sewn label, to let generations hence, (should it EVER become an Heirloom piece 😉 ) know who and where it was made! A little touch I probably should have already been adding to my lovingly hand-crafted quilts…better late than never though ! As a seller on Etsy I have become aware of just how many vintage quilts there are, and, it’s important to new makers like myself, and a must, to let people/buyers know that they are NEWLY made rather than vintage…..though, I hope and feel my own designs show a contemporary style anyway! As much as I love patch working I do feel sometimes people just add too much (colour/mix of fabric designs/ confusion etc,etc (this is my opinion only-others may feel differently and we should all have our say, I think), I do like some structure to what I design and make, though others may too have other tastes, which is of course absolutely fine too! Whilst I realise in the olden days, Patchwork items were made out of what was available and maybe in short supply, it is now a luxury to go and buy new fabrics to create such items today. Though it is my belief that by buying only small quantities of each fabric I am still forcing myself to create something out of very little – even if it is all new material! 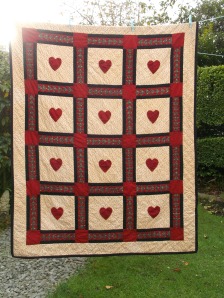 I look out proudly at my latest achievement as it gently blows in the wind after its final wash before going off to my Etsy shop! I do hope it can eventually make someone happy…..and of course warm and cosy! 🙂 I certainly sewed many, many hours during its creation (on average, I reckon I work for 2 pence per hour including material costs!!!!! Minimum wage would make it only available to the Billionaires of the world – I’m not sure they shop on Etsy?!?) and incorporated lots of sweet dreams into it too! – they are include free of course!!!  😉 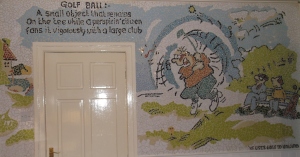 I have been known to have he odd moment of madness …..! After doing quite a few murals some years ago, I thought I would have a go at a mosaic…WELL, we did have a pretty boring kitchen wall!!! At first I considered some twee Parisian scene, but that just didn’t have relevance to our family….Golf however, not that I am the least bit a sport fan, but when our children were younger they both took it up after a few lessons. As my Dearest already played and the three of them toddled off each weekend, there was only one thing to do…get a set of clubs myself. Apparently I was a natural and could hit it for miles, well maybe not that far… – that was….. until my Dearest decided to show me how to do it…”keep your back straight, bend your knees slightly hold this thumb round that side other hand twisted that way keep your shoulders parallel…’ and so the instructions kept coming! My first attempt to hit the little ball, in the enforced mannequin position I had been shaped into by my Dearest, meant, not only did I miss the ball, I nearly fell over sideways following my swing…Aaargh! Why couldn’t he have just admired how I wanted to hit that tiny ball???? Dearest never gave up on me ;-/ and added more and more instructions on how to do it….sadly I was never able to get my own little swing back…. EVER!! Nonetheless we did all play golf together for many years – so when I found an old golfing calendar lodged in a drawer, I thought this picture was just the perfect thing for a boring wall!!! Over ten year on, it still makes people smile!

For something a bit different I thought I would do a post on what I used to do, rather than what I’m doing at the present. After mentioning my kitchen mosaic in a comment, Sheila from Sewchet, here on WordPress, expressed that she would like to see it…so here it is…along with a couple of snaps of old murals over the years…what can I say, our house has never been quite…..conventional!  Artistic licence, I think they call it! 🙂

Working on the large scale was always a challenge and great fun too! I do miss doing them, though we seem not to have any spare walls at the moment for some reason…?

‘My Stonehenge,’ with a floor to celling snap and the trompe l’oeil panelling below

My daughter still won’t let us decorate over her mural!!! Sadly the quality of my records leaves more than a bit to be desired, most of the images are separate photos stuck together from an old album I dug out to give an overall impression of the paintings as the room was always too small to get the whole picture in one go! Still it shows you how I decorate with emulsion paint 😉

George grew up a bit more….like I needed any excuses?!? 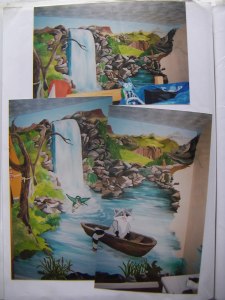 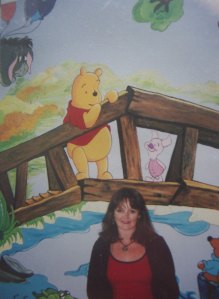 ‘…maybe this Harry Potter guy will be famous some day…..?!?’

…’good job I’m not frightened of spiders…isn’t it mum???’

These cute little guys are extremely useful for holding small items, like craft tools or even as a cosmetics purse. Even though I have made these before from my own pattern, these new ones are smaller and more compact, making them perfect for carrying around in a purse or bag, whilst keeping things organised and safe. Smaller they may be, but definitely no less appealing. Each and every one I make will always be different too making use of both old and new buttons to give them a funny little face.

Made simply by having two pieces of square fabric in different colours, with a thin layer of wadding sandwiched between, then folded in an origami style to produce a total of 8 differing sized pockets. After hand stitching the flaps over the front of the pouch I then selected colourful buttons which instantly add a face feature. A very straightforward method of making a hand-twisted cord loop is an easy solution to keeping the pouch pockets closed and it also gives a little moustache for fun!

With the pouch flap open, the twisted cord loop also doubles as a little tail – So cute!

Looking down into the pockets of the origami pouch 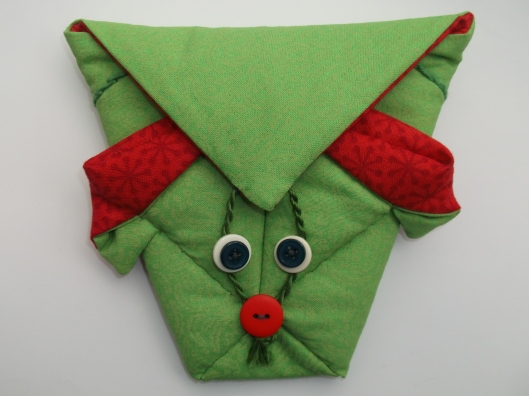 ‘Doh! I feel really really sad today – and a bit green around the gills too! 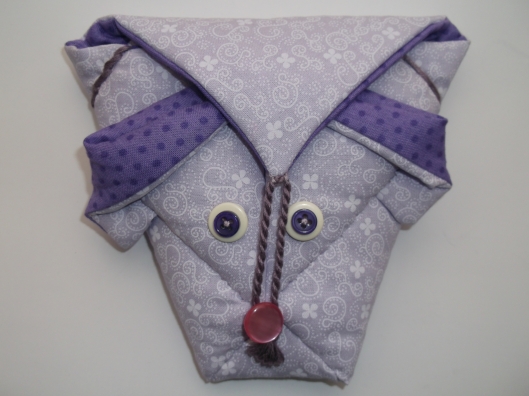 …I’m…I am trying… really… really hard to keep a straight face… and not burst out laughing!